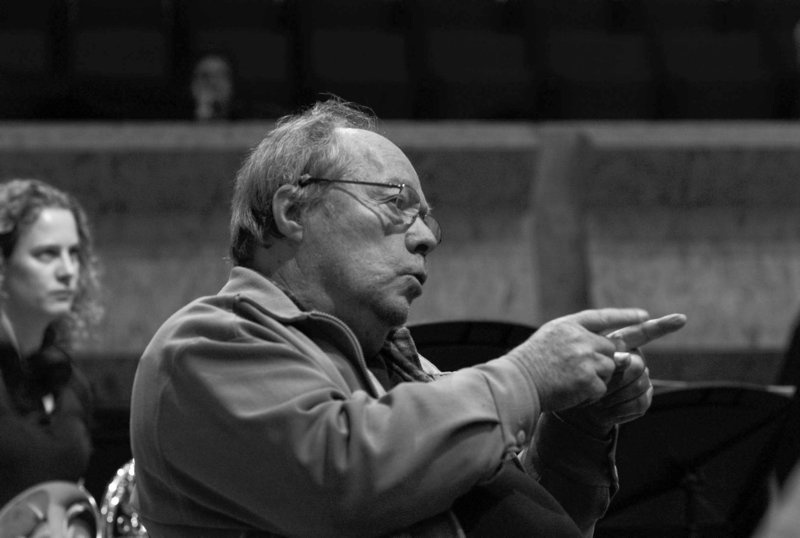 I assume you know the scores and their secrets. To many the score looks like a secret code. Learning the score is the first requirement to leading an orchestra. Nevertheless, the most difficult part begins with the orchesta rehearsal. As your instrument, you have a living machinery, complicated to handle, not some old fashioned band in an officer’s command. We are all musicians, doing teamwork.

My pedagogical motto is: Help, but don’t get in the way.

Rehearsal technique. There are some aspects which must be known and planned in advance. You will know how much rehearsal time you have but when the soloist shows up, time can be limited. Player’s absences and illnesses complicate the flow of rehearsals, as does the state of players’ instruments, acoustics, air conditioning, etc. The degree of difficulty of the works is anyway the most important thing to consider in dividing the rehearsal time between pieces. Surprises will pop up from one place or another.

Coming to the rehearsal. The first contact with the orchestra is decisive. What kind of picture do you give of yourself? You can’t give any other than what you are. Pretentions and false images will show through sooner or later. If you try more than you are capable of it shows. Some conductors have all kind of equipment with which they pretend to show their importance: scores, books, conducting sticks, towels, attention arousing stuff like baton cases, watches and other junk to get extra notice. Avoid all of this. Be a player among players. Speak clearly and calmly. Respect people. Don’t imitate the player’s mistakes. Keep talking to a minimum. Posture should be as natural as possible, characteristic of the music, same with gestures. In some cases it is enough to beat time without expression or nuance; the musicians also have music which they have to read, not just sit around staring at you. So, feet and legs then: not bent and crooked, squatting or hammering the floor. Audible extra sounds and speech disturbs both the musicians  and audience, and can get in the wayof recording. Many recording sessions need to be redone because of the conductor. Hands’ position, neck stiffness, expression and looks  are revealing and have an effect on the performance. It’s worth studying yourself not in a mirror, but rather with video. By playing the work you come to find the inner core. Minimize therefore your  speech, always focus your words to the people farthest in the back, but not personally unless you want to thank them for a beautiful solo. In any case, wait for silence before speaking. If there is some uncertainty regarding bowing, give time to the concertmaster. This is his/her important job. Be sure to notice that pencils are in use. When addressing a concern, first acknowledge the group/player, call attention to the place in question, and then give the changes/corrections you want. When beginning from a new place, say the place only once. This sharpens concentration.

Acknowledge wrong notes with a pokerface (show no expression). Everyone makes mistakes. If and when you stop the orchestra, ask yourself of its necessity, don’t just show that you noticed something. Start from the same place a maximum of three times. If after the third time there is still a problem, you need to change the gesture. You always have to have new technique up your sleeve.  When you rehearse an unknown piece measure by measure, every now and then play the large section. If you take a technically difficult section under tempo, don’t hammer out the beats, just listen (don’t get in the way). Measue numbers ar difficult to finds when not every measure is numbered the way they are in many newer works. For this reason it is best to take new starts in the middle of the movement from or near rehearsal numbers or letters or tempo changes.

Show with your fingers what pattern you will beat. While playing is is also possible to do so, but show well ahead of time. warn players of a dangerous place ahead by raising your hand, without baton, usually the left. When it is a qustion of meter and pattern change, show the changes with fingers ahead of time.

Nuances and tempo change the first time through is best exaggerated, second time conduct as you would in concert. While playing you can call out directions, but it is useless to try to speak or shout during forte sections. You can call attention by pointing to a player or group when helpful, but is is not necessary to stop the orchestra.

Situation comedy lightens heavy work, but there are limits. Too many jokes (especially stupid ones) make the atmosphere heavy. Be sensitive to when a situation is helped by a break. If it becomes uncomfortable hot or especially if you become sweaty, don’t start scratching, clawing, poking and all kinds of antics, this gives an apelike impression. Simply call for an extra break.

Rehearsal continues in a friendly spirit while still maintaining a pure, artistic working atmosphere. Staying fresh and creative, not routine, stimulates the rehearsal if the orchestra absorbs things fast. It’s not necessary to make them play just to kill time. Players are very sensitive to this and the atmosphere drops. In the dress rehearsal, if there is time, orchestras like to play through the whole pogram without breaks (as with opera and theatre). This way they know how to use their energy and concentration and best focus it in the concert. If the program is too tiring for some winds or brass, you can invite them to save themselves for the concert.