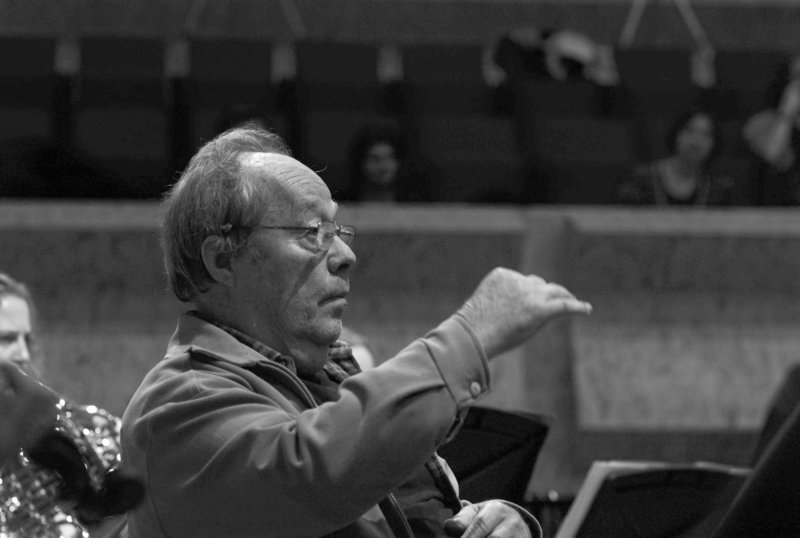 May this introduction be an intimidation-stimulus-encouragement. The curious will of course continue. How will you be able with your being and hands to express everything going on in your head? You are impatient. You wnat to bring out all your knowlegde and explain your vision in any way possible. It is goodto have a vision, not just stand there beating away. That too the orchestra senses. Whether the performance machinery is ensemble, choir, opera, symphony orchestra, whatever, there are in the group. many artists behaving in a different way who also have their own opinion of the piece at hand. Let’s take for example a symphony where there is usually four movements. Have you thought of their relationship to each other? How much silence between the movements do you want and why? For example  Brahms 1, where transition to theFinale must be sensed exactly, or Sibelius 2 the transition  to Finale. Are you slowing down under the tempo of Finale? Rather not, because romantic tempos go al next tempo.

Questions are pouring forth whle examining the score. It is worth exploring for a lifetime (Zecchi). Because you always find something new if you are open for changes, an innovative musician. Yet, we haven’t even talked about beating or rehearsal technique. That is already a new subject.

When you open the score, there is the name of the work. Opus number, composer, key, maybe tempo? And the menu … instrumentation. Where do you begin? You relate notation to tempo. For example, if there is no tempo mark (older music) look at bass lines, they cannot go very fast. Think carefully before starting, otherwise the pulse will not live. It is most important. Everything is movement, rhythm. Everyone has their own pulse. Find with it the pulse of the work, the composer. Doe sit reject ir … or?

In older music, markings were not so necessary. Dances were known, and the suites are in their tempos. Menuet, allemande, gavotte, sarabande, etc., how many can dance them? It is worth taking some courses. One has to only listen to tango or waltz to know that they are played too fast. In the beginning of the waltz, women had long skirts, non miniskirts (waltz musette). Men had heavy uniforms. These just as hints for the tempo of these times.

Now we are only in the tempo marking. Easy but dangerous path isto listen to the masters’ recordings. Accelerated course to surface gliding. Examine the score yourself. The notation gives the answer, the piece will bring itself into focus. Character will also be found in the instrumentation. Read the whole work in your chosen tempo. Now you have a picture of the work in your head. Leave it there to stew in its own juices. You can take pictures of other works. Take the same works out after a week. You note that you remember many parts and at the same time you can deepen the whole. Also those places you were wondering about at prima vista have cleared. Now starts slower and deeper exploration. Maybe tempo changes and modulations will clear, if not, do it more times. If you can’t hear it in your head, play it on your instrument until you can hear the harmonies in your head. Explore the phrases, bowing, blance. There you can find problems because quite few composers were masterful in instrumentation. On the other hand, the strength and colour of the instruments have chabged over time. For example, corno has doubled in power, French bassoon has changed to Heckel I have observed countless poor balances. Many places don’t function without changing them a little. Even Mozart has a couple of spots. Why only every hundredth conductor corrects? Don’t they hear or dare? Beethoven sounds “dumpier’ than Mozart. Brahms sounds too often brass heavy. Sibelius doubles too much  (many octave and fifth pedals). In Berg it is already a question of colour … difficult … For example the use of tuba and timpani in Sibelius is an eternal drag. One can’t leave them out but dynamics must be changed. Could it have been kajanus imposing the Germanness? More difficult case are the low notes of oboe and bassoon. Not many players can play them ppp as marked. Second oboists are afraid among other things of Dvorak cello concerto second movement. It can beplayed by the way by English Horn. The same with Sibelius in many places for example in the Fifth Symphony second movement long low notes. Tchaikovsky Fifth and Sixth are also troublesome in this way. Try different kinds of bowing if possible. With famous orchestras it is no longer possible but (Berglund). Ask experienced concert masters, don’t trust tradition. There you can find only many bad habits. Funtek was a skilful violinist in his time, but his fingerings in countless Bruckner passages didn’t go through anymore in the sixties. In Prokofiev’s and Stravinsky’s scores are bowings and other markings of which only part is in use anymore. Punta d’arco for example in Sibelius has been erased in many spiccato places. One must find a sound vision in the notation. It is more important than the marked way of playing.

The tempos of a work are more important than one would beleive in the beginning of the studies. A young person is in a Sturm und ‘Restaurant’ period for many years and tempos go up and down (as it should be), but they settle into their own little by little. They become personal. There probably are not two people who think exactly the same way. Above we mentioned already the transition to Sibelius 2 Finale. More examples of “mis”-understanding: Brahms 2 first movement ranquillo towards end – before that is rallentando, ok, but later again rallentando, but sempre tranquillo – somore but rallentando may not go under tempo. Ans then new tempo. Mamma mia! There are countless of these. Explore for example Sibelius’ use of al!!?? There is not always where to. hen also he marks A tempo and Tempo Primo. It looks like it is meant to be the same but no. Valse triste for example. Read. There are also many misprints, mainly missing dynamics. Not all conductors even know the differences with A tempo, they pronounce it wrong, like “ay” tempo. What then is B tempo or C Tempo? I noticed this again and as recently as may 21 1997. Unkwown markings are also piu and sometimes meno. Sibelius’ meno is in many places not observed, even on recordings. explore. Sibelius 1, meno andante = faster …..